Floor tiles from the Zombicide Invader core box include a couple room types that allow characters to take special actions. 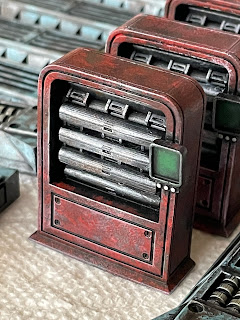 The first type is the 'red room' which is the only type of room in which characters with the 'Military' designation can search.  I really haven't figured out any reasonable logic behind that rule other than to try to hinder them in some way to make up for the extra armor point they generally have over 'Civilian' characters.  The closest thing to an explanation that I could come up with is that the Military characters are usually decked out in power armor and may have difficulty shuffling through drawers or inside cabinets to find stuff.  One solution which came to mind was an 'item vending machine' to make items easily accessible.  The machine does not have a good index of what items are in each bin and therefore characters still get a random item.

Anyway, it seemed like a good enough excuse to design and print some special models for use in the modular Sci-fi walls/floors I use as replacements for the game's floor tiles.

This model prints as a single piece with no assembly required. 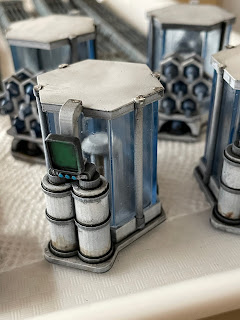 The second type of 'special' room is the blue room aka 'Oxygen Room'.  These rooms are generally located near an airlock and allow characters to pick up an oxygen tank if they plan on going outside into an environment lacking the proper atmosphere mix for humans to breathe.  I envisioned some sort of water-based oxygen extraction tank combined with storage tanks and portable canisters that can be pulled out of the filling station and ended up with the design pictured here.
The blue 'glass' is clear SirayaTech Blu resin tinted with blue alcohol-based dye.  They printed out very well on my Elegoo Saturn 3D printer.  I gave them a clear coat varnish which made them much more transparent and removed the cloudiness the curing process can create.

This model prints in several pieces and requires some assembly.

Here are a couple photos of the two models placed in the rooms.  Using special models instead of painting different colored floors kept the number of floor tile prints to a minimum as well as added a little visual interest to these special rooms. 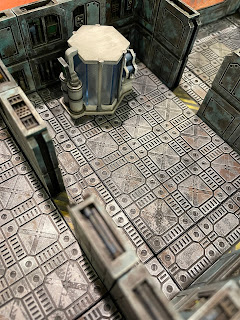 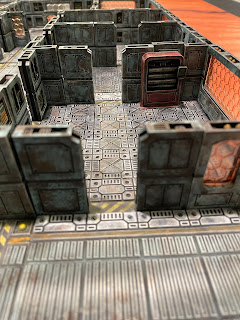 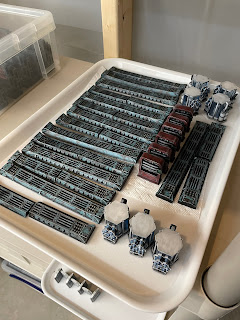 Here is a photo of all seven oxygen generators and six 'item vending machines' all together after assembly and painting.

Along with these are the outdoor area separators that I designed, printed, and painted in the same blue/gray scheme as the walls.  The separators have spherical magnets on each end (or only on one end if they are a 'half' connector) that attach to the magnets of the wall sections and define the outdoor zones.

If you are interested in printing any of these models yourself, they are available on my Thingiverse page.