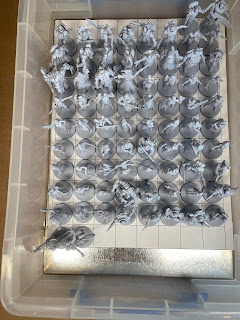 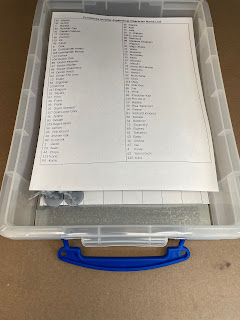 The Zombicide Invader Kickstarter includes several...well, more than several...miniatures - currently 83 playable characters alone including a Kickstarter exclusive from the Dice Tower.  The sheer number of characters alone was enough to make it difficult to get a game started due to having to find which figure corresponded to the various chosen character cards.  CMON added a convenient unique number to the bottom of each injection molded base the characters stand on, but unfortunately did not add the corresponding number to the character card.  Without being able to quickly scan for the correct number, the only alternative was to swim through the sea of gray miniatures looking for the 'correct' power-armor-wearing miniature and it was a bit of a daunting task.

Leaving the characters in the plastic trays was a bit miserable as well - especially if several of characters and Xenos are taken out at the same time so I ended up storing all the miniatures in a set of Ziploc bags.  The bag option was very space-efficient and was much faster to put away the Xenos and the rest of the miniatures at the end of a gaming session.  Now that I'm painting them, tossing painted miniatures into a bag together is not great for the paint job and just feels a bit...wrong, and not an acceptable solution.

The resources below may be useful to you if you are one of the 18,486 backers or one of the poor souls who decided later to buy a Kickstarter copy off eBay for the usual inflated price.

Anyway...I've now got things organized and a lot more accessible. 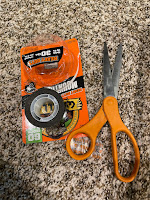 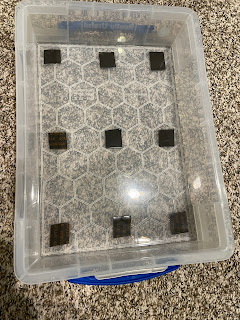 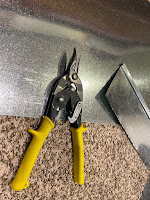 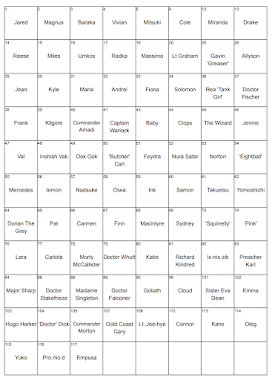 Here is a screenshot of the paper I printed out to place in the bottom of the plastic box.  Each square is a space for the corresponding miniature to find its home.  They are in order of the number on the bottom of the base and when combined with the alphabetical name sheet, each miniature can easily be identified and found very quickly.  Here is the link to the Google Doc for the printable name grid.  There is one row of names too many to fit on regular Letter-size paper so it is set up to print on Legal (8.5"x14") and cut down to fit into the 4L "Really Useful Box".

Obviously, the miniatures aren't going to just stay on their 'home' space without some sort of encouragement.  I used a similar process to my Modern Zombicide Storage article from years ago.  While the jewelry trays used for that project stacked and stored nicely in the matching transport case, it was difficult to find trays that were slightly taller to accommodate taller miniatures.  I also found that the caulk-gun-applied adhesive used to secure the galvanized steel had a tendency to melt the plastic of the trays and was generally a bit messy to work with. 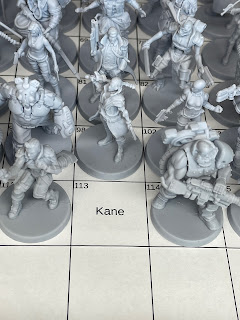 I found that the 4L boxes linked above have sufficient height to accommodate even the larger Invader abominations, but are not so tall that a lot of space was wasted when stacked on each other.  The same HVAC galvanized steel was cut to fit the box (it was easy to just place the box over the tin and trace around the little lip on the bottom of the box).  Gorilla Heavy Duty Mounting Tape, generally used to hang stuff on walls, replaced the messy caulk-based adhesive.  I simply cut 1" squares of the tape and placed 9 of them spaced out on the inside of the box.  The galvanized metal was then placed on top of the adhesive strips and pressed down.  Now the paper is placed over the tin to enable an easy-to-see positioning for each character.  Combining small magnets glued to each base similar to those used in my previous article, the miniatures now have magnet-driven motivation to stay put. 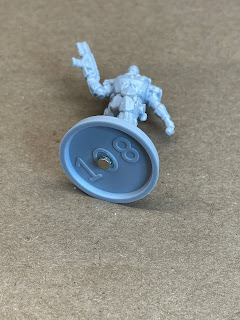 These miniatures were actually easier to glue the magnets as there was no need to drill holes due to their ridged design.  Unfortunately, the ridges are taller than the smaller magnets I had used previously and required a 1.6mm thickness.  The only downside to that is they are sold in packs of 100 for the same price as the packs of 150... 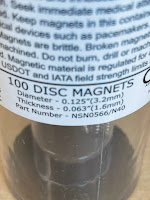 Here is the A-Z list of all of the Zombicide Characters that I am aware of - including the Comic Book Extras.  Even if you don't decide to go through the trouble of making the magnetic storage solution, the name-to-number reference should be useful to find the 'correct' power-armor-wearing character.  A printable multi-column layout is available in the same document as the name grid Google Doc linked above.

Please let me know in the comments section if anything is incorrect or if there are other characters that I've somehow missed.

I've got a second identical box that holds all of the Xenos from the Core set (plus Kickstarter extra Core miniatures.  All of the Workers, Hunters, Tanks, and the pair of Spoiler Abominations fit in the container perfectly.

Thankfully, the boxes are tall enough to accommodate all of the rest of the Kickstarter Abominations and other assorted Xenos such as Flingers, Xenomoths - a 3rd box holds all of those.

Of course, then there is the Dark Side expansion.  A 4th box holds all of the Xenos for that set.

Yes, the storage volume requirements are a bit larger than a few large Ziploc bags, but I already have painted all of the Core Xenos and as we have established above, throwing painted minis into a bag is simply not acceptable. 😉  These boxes are less tall than the boxes that held the plastic inserts so overall, the space requirements are not much different...assuming I can get myself to throw out the original game boxes...