One complaint about Zombicide Invader that I have seen on YouTube videos, message boards, and social media is that it is too easy.  Generally winning all the time really doesn't bother me at all as long as there is at least some point in the game that makes me think and it feels like we might not make it.  I do, however, agree that when playing using a cautious strategy and optimized actions this game can be boring for some players - especially when playing with 6.  By the time the 5th-6th player's turn comes around, there often isn't anything left to kill.

These are the tips that have led to a nearly undefeated record (at least until putting into effect the changes discussed later):

Following the rules above with the base set of Invader (plus the Kickstarter extra xenos to add a few more Workers, Hunters, Tanks, and Spoiler), the probability of winning this game is very high.
To up the challenge a bit, I've been adjusting various knobs to find a better balance.  These are the differences that have made things difficult...potentially very difficult depending on the spawn draw and search results.  In fact, we're currently 0-3 on Scenario 7 - Xenium Burger.
Set up the spawn deck:
Choose some lower-powered options:
Change some rules:
The deck changes alone may be enough to provide a significantly more challenging game.  The Seeker Workers themselves are not really that big of a problem to deal with combat-wise as they are just like any other worker.  Their extra activations when another Seeker card really isn't a huge issue either if you follow the 'Stay together' tip above.  The real problem with them is that there are so few of them (8 in the KS Civilian Extras).  Within two spawns you could be out of them and from then on, additional Abominations start spawning as well as extra Abomination activations.
Frankly, I won't use this spawn deck configuration again with only 8 Seeker Worker models.  It just brings in too much unpredictability and is a recipe for an Abomination rampage.  The two options I see to bring some balance back in would be to remove half of the Seeker cards from the spawn deck or acquire additional Seeker Worker models. 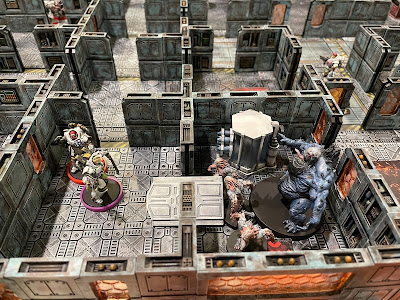 I do like the Juggernaut (the model is really neat) as it puts the fear of an abomination back into the game as concentrated fire is not an option to deal with it.  The 50/50 split of Spoilers and Juggernaughts seemed to work fairly well, but will need some more plays to see if it could be better.
So we played 3 games in one night to win Xenium Burger and lost after 4 rounds the first time due to a Juggernaut rampage initiated by running out of Seekers.  The second game started off just as the first with the Juggernaut spawning at the closest spawn to the starting zone, but was lost due to a rampaging Spoiler destroying one of our objectives.  That rampage was again due to running out of Seekers and an extra Abomination card draw.  In the second game, we lasted 5-6 rounds.  The third game lasted several more rounds than the first two, but again was lost by a rampaging Juggernaut in combination with a Seeker that moved two zones and attacked thanks to 3 back-to-back Seeker cards drawn.  It could have been prevented had we stuck with Tip 1 "Stay together" as one character was left alone in one zone behind the rest of the group.
Some of the tweaks to make Invader more challenging can be done with the base game alone.  Obviously, the lesser-powered bot/turret would be used, using 4 characters instead of 6, and removing cards 1-25 are all in the rules as recommendations and do help.  However, I think the Juggernaut really adds another dimension to the game and is available in the Black Ops expansion which can still be purchased on Amazon.  As of today, the extras including the Seeker Workers, Xenomoths, and Flingers can still be found on eBay and The Game Steward.  Of course, they have one less in stock now as I decided to snag another set of them...  I see they also have the full Kickstarter Soldier Pledge which contains both Black Ops and all the extras - and a plethora of additional characters.  If you enjoy Invader and have just the core box and find it too easy, I recommend you get some of the extras mentioned here to really make this game shine.
Posted by Ryan Skow at 12:16 AM