For the most part, the Zombicide Invader rules are fairly well laid out and make sense.  Guillotine Games has had many years to refine the rules through the generations of the Zombicide franchise so it isn't surprising that things are pretty streamlined by now.  There are, however, some new concepts in their new SciFi universe that don't make a lot of sense as well as an old irritating rule that they still have around...  Nothing a few house rules can't fix!

Shooting into Zones with Survivors

"Only misses on Attack rolls of '1' hit Survivors standing in the target Zone." 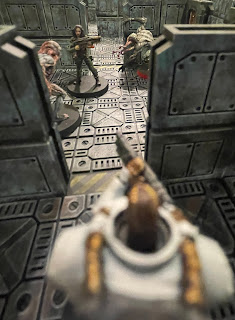 The rulebook states that ANY misses when shooting into a zone containing survivors automatically hit the survivors and are allocated accordingly.  This means that when shooting into a zone containing survivors and Xenos, it is impossible to have a result that misses completely - you either hit your friends or the enemy.  In many cases, it is also easier to hit your friends than a towering Abomination.  This just seems ridiculous to me and thus, House Rule #1 amends this rule to only hitting friends on rolls of '1'.  There is still some risk of hitting your friends, but just seems more reasonable than the standard rules.  This has been an annoyance to me since the very first version of Zombicide and I really wish they'd fix it or give some reasonable explanation for why they keep it the way it is.  Does this make the game a little easier?  Technically yes, but for me, even the risk of rolling a '1' is enough to deter me from shooting into a friendly-occupied zone unless there really is no other choice...

"Bullet-based weapons are allowed to fire in both interior and exterior zones."

Either these futuristic/SciFi weapons are inferior to our modern-day firearms or this planet has some very strange chemistry/physics in play.  Gunpowder in modern-day firearm cartridges contains its own oxidizer and is not dependent on oxygen in the atmosphere in which it burns.  Firearms can be fired in space.  Unless I hear some other reason that makes any sense, the artificial limitation on weapons firing in exterior zones is nixed.  Does this make the game a little easier?  Yes, but the inability to have any sort of logical explanation for the limitation other than to 'balance' things is too difficult for my mind to overcome.  The flamethrower and other fire-based weapons seem to make some sense to limit their outdoor usage though so the indoors-only rule for 'hellfire' still stands.

"Searching by Soldiers AND Civilians can ONLY be performed in the red security rooms." 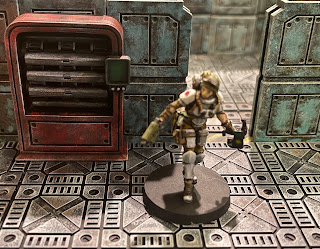 The rules state that Soldier characters may only search in the red security rooms.  I can't figure out why they wouldn't be able to pick up a weapon from a table in any given room just as easily as a Civilian could.  The only thing I can come up with is that it is an attempt to 'balance' the Soldier class out by nerfing their ability to search or just an attempt to add some more variety to the game.  Nerfing isn't needed as the Soldiers are generally not much more powerful than Civilians - one more armor point?  So they can withstand a single tank attack instead of dying after one hit.  Everybody (except Magnus) dies from a single Abomination attack...one extra armor point isn't really that big of an advantage.  The starting skill is usually the differentiator between a 'good' character and a 'not as good' character and the skills have no Soldier/Civilian boundary.

One option would be just to treat the red rooms like every other room and anyone can search anywhere.  I do, however, think acquiring items is a bit too easy in this game and since the game gets a little easier with the previous two house rules, I figured making it harder might be something fun to try.  So...both Civilians and Soldiers can ONLY search in red rooms.  When using the walls/floors I made, the security rooms are signified by the red 'item vending machines' so it is somewhat thematic as all sorts of good stuff can be stored there and they are fairly easily accessible.  This may totally not work out in some scenarios and is sort of a prototype house rule that I'm not sure I'll keep going forward.

The exception to this house rule is that any character with the Free Search Action ability may use that action to search in any type of room.  This allows the 'search-oriented' characters to not take a big hit on their primary ability.

"Each Bot and Turret may only be activated a total of 4 times per Player Phase via the remote." 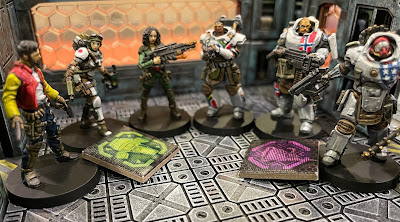 Note that this only applies to the remote control token and not to Characters with the "Remote Control: Bot/Turret" skill nor Characters standing in the same zone as the Bot/Turret.  'Free' machine actions and 'extra activations' (such as from Born Leader) do not apply to the activation limit and can always be used to activate a machine.