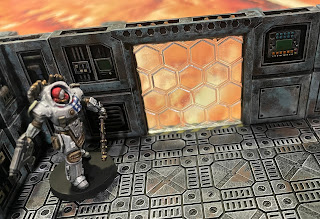 The Zombicide Invader game includes what look like 'airlocks' that characters and aliens can just 'walk through'.  To implement this idea in 3D, I decided to use SirayaTech Blu clear resin tinted with blue alcohol-based dye.  The O2 water tanks were printed with the same resin, but included more blue dye as these came out a bit too translucent.  The airlocks slot into a 4-inch wall section and consume the middle two inches.  Game-wise, I'm considering these as clear-blue 'force fields' that can be walked through as they are able to detect objects that are intentionally trying to move from inside to out or vice versa.  The force fields hold back gasses, dust, and other small bits from passing through.

The right side is the post-cure piece and the left side is after a gloss clear-coat.  I kind of like the look of both, but opted to go for the more transparent version as it felt more like a 'force field' to me. 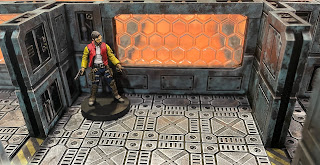 In an effort to break up the mundane endless hallways flanked by solid walls, these window sections came to mind.  Again, I consider them to be some sort of 'force field' with a more aggressive algorithm in place to prevent anything from passing through from either direction.  The same SirayaTech Blu resin was used, this time tinted with a reddish-orange which I think contrasts nicely with the blueish paint scheme of the walls. 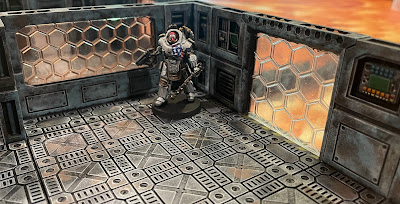 I was able to print all of the windows I wanted for this project in one printing on the Elegoo Saturn.  Everything stuck very well to the WhamBam FlexPlate along with the tips from Jan Mrázek's work in his Blog Post regarding bed adhesion and elephant foot prevention. 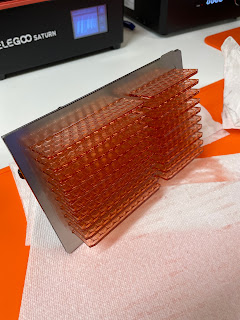 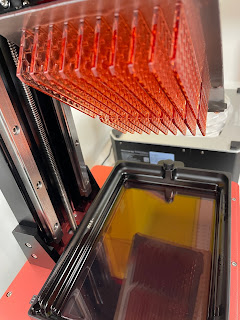 The windows got the same gloss clear-coat treatment as the airlock doors.

All of the 3d models for the walls, doors, windows, and items are freely available on my Thingiverse page.