After deciding to paint the original Zombicide game, Prison Outbreak, Toxic City Mall, Rue Morgue, and a couple Zombie box expansions, I thought to myself "How am I going to store all of these painted figures?"...  Throwing them in a ZipLoc bag isn't going to be good on the 'ol paint job and storing them in the original formed plastic containers just takes too long to put back in - not to mention half of them wouldn't fit anymore due to modifications I've made to them.

All of the miniatures I've painted prior to these are metal and there are far fewer of them so I had just bought hard-case foam like this.  I would have needed at least six hard cases plus something special for larger figures such as abominations.  After spending so much on the figures and paints already, I really didn't want to spend another couple hundred on foam cases.  I also looked into BattleFoam and other foam tray solutions, but they aren't cheap either.

Fortunately, a friend of mine who is extremely organized in everything he does showed me his solution for the various games he plays.  He buys jewelry trays from Gems On Display as well as a case which holds six of the trays stacked on top of each other.  Six trays and the case - including shipping - turned out to be $36.69 - close to the same price as a single hard foam case!  Make sure to verify the title of the product page for the trays is "Plastic Stackable Jewelry Tray-Full Size-2".  The "Leatherette" wrapped wooden trays do NOT work well as they do not lock together and slide all over...I learned the hard way...

The trays then needed to be lined with metal.  You can buy "Flex Iron/Steel" metal sheets that perfectly fit at Dave's Baggage Train, but since I was trying to do it on the cheap, I went to Home Depot and picked up a 24"x36" sheet of galvanized steel for under $10.  To cut it, I needed a tin snips anyway so I'm not counting that as a dedicated cost to the project... ;)  The metal was cut to fit nicely inside the tray and glued in with Liquid Nails caulk.  Another important lesson learned was to apply the Liquid Nails in lines and do not spread it out all over the bottom of the tray.  Apparently the adhesive softens the plastic of the trays a bit and causes them to sag...  You can really apply the adhesive fairly sparingly as it won't take much to keep it in place.

The third components are tiny magnets 1/8"x1/16" (3mm x 1.5mm) to put in each figure's base.  I already had a Dremel, but needed a 1/8 in. Shank High Speed Multipurpose Cutting Bit.  It is special compared to a regular 1/8" bit due to not having a large taper on the front which would have cut through the base before making the hole deep enough.  Thank you very much to Magnus Rydin for the great tutorial over on Board Game Geek!

To avoid losing my mind trying to cut the proper depth, I made a jig using the depth guide on my Dremel combined with a piece of wood with a hole drilled out about twice the diameter of the bit.  I was then able to extend the bit through the board to the right depth.  It was then just a matter of visually aligning the miniature's base and pushing down the base flush with the board.  It resulted in a perfect-every-time hole that only occasionally required an Exacto Knife to clean out a stubborn piece of plastic.

I then placed several magnets on a scrap piece of sheet metal.  A small drop of Loctite Gel Control super glue was then applied to the hole in the base (a bottle of that stuff is good for hundreds of miniatures).  One of the magnets was then slid near the edge of the metal and the miniature's base can be pressed onto it.  Now, the metal can just be set on top of a paper towel covering some scrap wood and the miniature can be slid off of onto the paper towel with magnet embedded.  The paper towel did a good job of wiping off the excess, but I still laid the miniature on its side until the glue had plenty of time to dry.  Slide the next magnet over to the edge and repeat the process.

This whole process may sound a bit confusing and complicated, but it was really simple once it got going.  I did about 300 of them in about an hour once I got the process down.  If anyone is interested in more details, comment below and I'd be happy to go back and add a few more photos and describe anything else in detail.  For now, I'm just recording what I did as an outline so I can remember the steps I did after a few months pass.

Here are the current trays filled with all the Zombicide figures I have thus far: 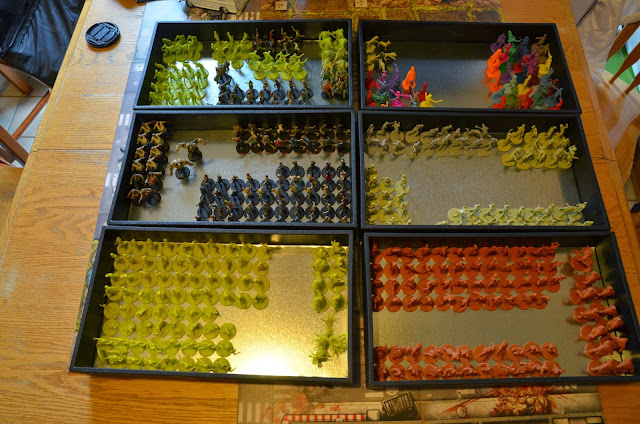 Not counting pre-existing tool purchases, this is a very economical and compact technique to store a large number of miniatures.  It is super-quick to access and put away the miniatures which really relieves the drudgery of setup and tear-down of the game. 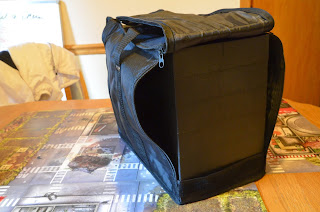 The figures stick very well to the metal allowing the trays to be turned upside down and tapped on without any figures falling off.  Even fatties and abominations have no trouble with moving around or falling off.  Only the A-Bomb from Rue Morgue posed a problem - it is taller than the 2" tray depth.  Thanks to the flexible nature of this solution, I just used some Liquid Nails and glued a small piece of tin on one of the vertical sides of the box.  Now the A-Bomb sticks to the wall like Spider Man.  Out of paranoia, I did put three magnets in its base, but that was total overkill.  You can see the A-Bomb clinging to the wall in the bottom left tray in the picture above. 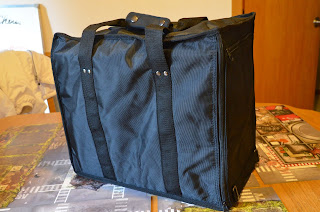 Each tray is capable of holding 96 miniatures which means the six-tray case can hold a whopping 576 figures!  That might not be enough to hold every single miniature included in all of the base games, expansions, and Kickstarter exclusive content, but by my calculations it will hold everything I hope to buy at some point...at least until Zombicide: Black Plague comes out!