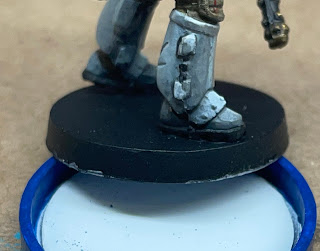 Why more rings?  As you can see in the photo of a painted base, the snap-on color rings included with Zombicide Invader (and other versions of Zombicide) tend to chip away at the edge of the base.  This isn't a huge issue, but it was annoying enough for me to go to the trouble of making my own bases.
I quickly designed a 3d model in SketchUp of the ring minus the little 'tabs' that dig into the bases and printed out a dozen.  Circular pieces of sheet metal (the same type used as the bottom of the storage containers) were cut and glued into the rings.  After a few coats of the best-matched paint-to-ring colors, I had a set of magnet-compatible rings. 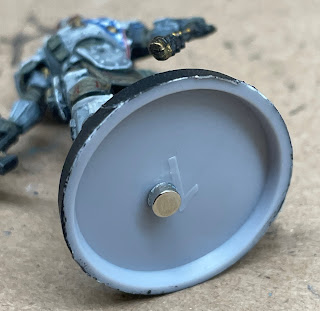 Each base of the miniatures already had magnets glued to them to keep them secure in the storage container and now they simply grab onto the bases.  They are strong enough to not have any trouble holding on when picking up the miniature and moving it around.

Generally, when playing solo, I don't use the rings at all as I'm very familiar with which character is which, but they are definitely helpful to new players.  It can be a bit overwhelming with all the miniatures and characters on the board for someone playing for the first time.

Another advantage to these rings is the elimination of the fiddling around with trying to snap a ring into place for those that fit a 'little too tight'.  There were also some rings that were a 'little too loose' and kept falling off.  It is possible that the magnet-compatible rings could be knocked off during handling, but they are so easy and quick to put back on, I don't foresee that to be an issue.
Here is a photo of several characters sporting the new magnet-compatible rings:

If anyone is interested, the stl file for the ring could be made available for free.
Posted by Ryan Skow at 8:33 PM