The silicon molds of the window frames seem to work fairly well.  I'm using the 'glass' method I learned from the HirstArts site to get nice flat backs on the frames.  Using mold release would probably help the resin to release from the plexiglass.  Alas, I have none and I'm not casting a lot so I'll keep using a razor blade to help me out. 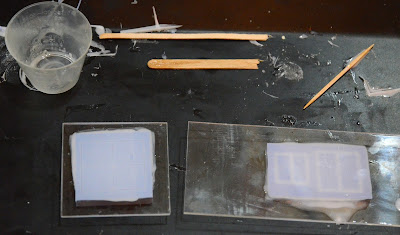 I made a mold of the large picture window and a mold for the two regular rectangular windows. Here they are with the plexiglass pressed over them.  These frames are nearly ready to take out of the mold.

Here are the frames after being taken out of the molds.  Next step is to use the razor blade to peel them off of the plexiglass.  Using mold release would make this step a lot easier I suspect... 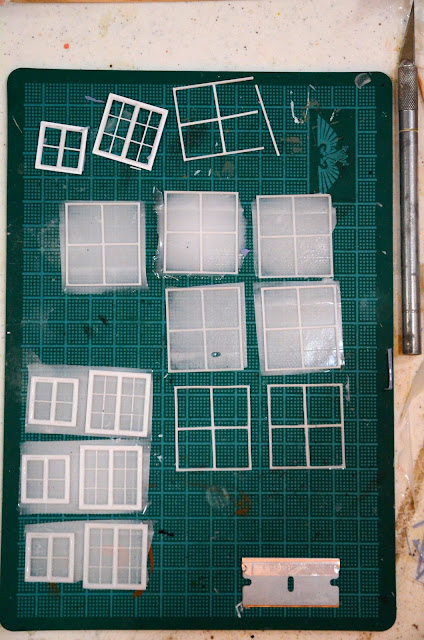 The top row are the polystyrene masters.  The bottom right are a couple frames that I've trimmed.  The rest are waiting to be trimmed using a hobby knife.  It is a bit tricky to prevent bubbles when pressing on the plexiglass.  Again, mold release may be helpful to get them to escape.  Fortunately, I only have had a single bubble in the small cross member that went most of the way through.  The other small bubbles I've seen should be easy to fix with putty. 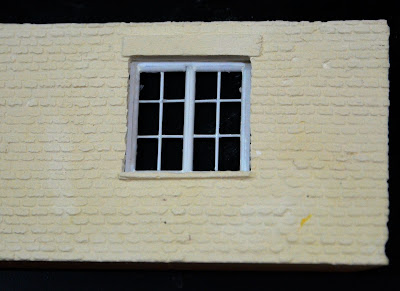 At this point I'm leaning back towards filling each pane with clear resin rather than a plastic sheet of some sort.  The frames are thick enough that I don't want to stack them back to back to form the sandwich.  They would just take up too much of the wall thickness.  I'll try one each way and see which looks better.

Here is what they look like installed - after doing a bit of trimming of the window hole to allow the frame to fit.  Overall I think they will work pretty good.

Having them open would be really neat.  However, it will also expose both sides of the window and require the resin method...

Next step is to trim the rest of the window holes before finally gluing the walls down.