Rather than go right in to assembly, I took a detour into working on the window frames seen in the reference photo (scaled up to see the detail): 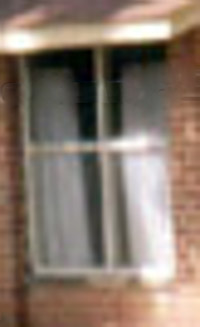 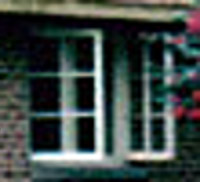 Initially the plan was to make masters from styrene strips, make a silicon mold, and then cast the frames in white resin.  The thought of just scratch building each frame briefly crossed my mind as I realized each window space wasn't exactly the same size due to slight variations in the Plasticine masters for the various walls.  Although chopping very uniform pieces of styrene wasn't a problem thanks to my Northwest Short Line Chopper II

, trying to glue the tiny fiddly bits took a long time and was far more tedious than pressing bricks...  Since the measurements are off by less than 1mm, I'm sticking with the initial plan and just trimming frames or brick to make the cast resin pieces fit.

Here are three of the distinctly differently sized styrene masters:


Most of the frames are constructed using quarter round or half-round styrene.  The thickest/widest pieces are 1mm.  My hope is that using the slightly rounded edges will be less prone to air bubbles.  The little cross-members are pretty thin so they still might be trouble to cast.  After a little putty and some sanding with super-fine sandpaper to smooth off any excess glue, these masters will be ready for casting.

I've never cast something so thin before and foresaw potential problems with gluing down the masters.  Normally for thicker pieces, it isn't a problem since a thin layer of glue doesn't really affect the overall thickness of the piece being cast.  These thin pieces, however, could be a problem and any glue oozing out would produce extra flashing to trim off and result in edges which are not as crisp as they could be.  Another great tip from Claude enlightened me to what what sounds like a great solution - double-stick tape!  Perhaps this is an obvious or commonly used solution to what certainly is not an uncommon problem, but it struck me as pure genius.  Anyway, I'm going to give that a try when making the silicon molds and see what comes out. 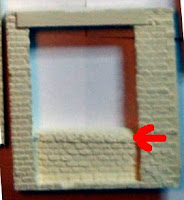 During the measurements for windows the first of what is probably several errors was uncovered.  The inset brick ledge on the picture window section of the front wall is about 1/8th of an inch too tall.  I'm not sure how I managed that, but the picture window frame I've made certainly won't fit without trimming down the bricks.  I'm not sure if I'll end up re-making the Plasticine master or just carve off some brick...  I could leave it alone as well, but would have to create another window and worse, it will look 'odd' right next to the other windows in which it shares the same pattern.

The jury is still out as to how to add 'glass' to the windows.  One option is pouring resin into each of the 'glass' areas.  That will be a lot of work per window and I'm not sure how the end result will look.  If they look great and the process is reliable this may be the way to go.  The guaranteed up-side of using this method is that only one casting of the frame will be needed per window to look decent from the inside and out.  Another option is to sandwich a piece of transparency sheet between two resin castings.  Actually the transparency could just be glued to the inside of the frame, but it wouldn't look the best from the inside...  There are two downsides to this option.  The first is that it will take twice as many castings.  Not a big deal and I'm fine with that.  The second, however, may be the deciding factor.  Although the frames are fairly accurate in their measurements, I'm guessing they may be off a little bit.  After flipping the frame, the cross-members may be off slightly and the misalignment of the two pieces back to back may be distracting. I guess I'll just have to wait and see how the castings turn out before making a decision.

Still to create are doors, the small window next to the door, and maybe the tiny window high on one of the kitchen walls. In addition, a couple separate sections of the 1" window would be nice so some of the windows could be modeled as open.  I'll probably work on those next and hopefully get the silicon mold poured in the next day or two.
Posted by Ryan Skow at 11:54 PM