Several weeks ago I started a conversion of a 1/48 scale Cessna 337 Skymaster airplane to be used as a Rhodesian Lynx.  I sculpted the .303 machine gun pods from Sculpey and drilled some holes to accept the brass barrels from Master Models.  On the under side of the wings I added mounts for the various ordnance used on this aircraft during the Bush Wars.   Eventually I'll make some Mini-Golf bombs to be mounted under the wings.  The modifications are fairly minimal as this kit is fairly close to that of the Lynx.  The lights in the middle of the leading edge of each wing needed to be filled with putty.  Some small strips of styrene were added to the tops of the wings as well.  I had a little pitot tube on the front corner of one of the wings, but I just noticed from my WIP photo that it apparently has broken off...I'll have to try to find it and glue it back on (only so it can be broken off again during a game).  One other difference between the basic kit and the Lynx is the addition of a bubble window on the pilot's side.  I'll need to make it from scratch which will be a different WIP entry.

Here is where it is at after being primed white and then given a coat of tan. 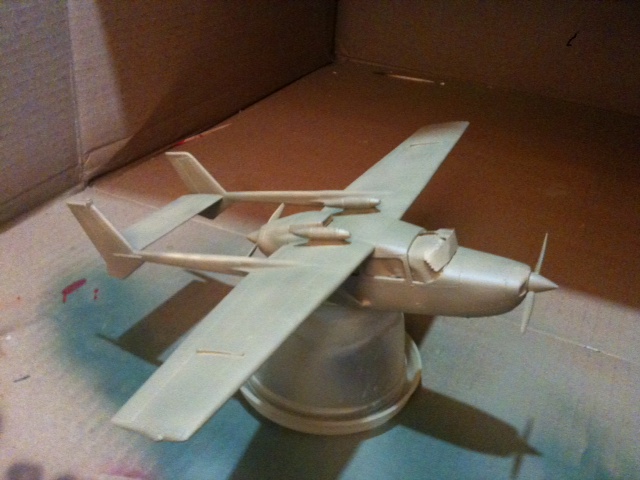 Here is what I'm trying to simulate:
Now the camo pattern needs to be lightly drawn on in pencil so I have a guide to know where to spray the green areas using my Badger Velocity airbrush.