Yet another side-track project has been lurking along with the other projects.  These storage buildings were actually the first of this brick-pressing method that I cast.  They have been a hidden prototype that I've been worked on in parallel to the other projects.  I just haven't been taking any pictures of them.

The roof sections were actually the last pieces to be made as they were something I had done before and was already comfortable with working the tin.  The walls of the buildings still need some additional weathering, but otherwise are fairly complete.  Below is the first (and only at this point) photo of the framed up roofs. 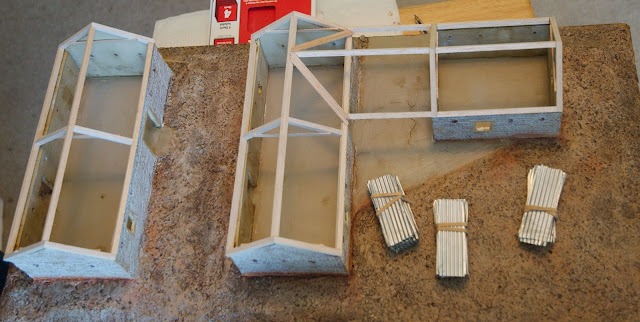 As with the other buildings I've been making lately, this one is also based off of an actual structure over in Africa.  Unfortunately, the owner of the photo I had in mind requires a license fee to show the photo directly.  His work is definitely deserving of pay - it just doesn't work in my hobby budget.  It is a pity as Robin Hammond has some really spectacular photos and it would have been nice to show his work inline with this post.  Hopefully this remote link to the photo doesn't suddenly break as these things tend to do on the internet...  Anyway, the photo is from the recent and ongoing struggle between the farmers in Zimbabwe and their government.

Some progress was made on the farmhouse, carport, and fence sections over the weekend as well, but I didn't manage to take any photos.  Lots of things are coming together, but there are also still lots of details to finish up before the convention in less than two weeks.