I got sidetracked from the farm house project to work on another related project.  For the 'On the Farm' Force on Force scenario I'm planning to run at Fields of Honor (September 28-30th 2012) there is a fence included on the map.  There are lots of examples out on the web with various levels of success in creating realistic looking fencing in 28mm scale.  I tried using piano wire to simulate the metal frame, but the wire was difficult to cut and refused to be exactly straight.  It was also miserable to try to get to stay square while trying to assemble it.  After various trials and errors, I came across Dennis Brennan's chain link fence product.  It was the most realistic I had come across.  I ordered the kit and was quite impressed with Dennis' customer service and prompt shipping.  I ordered on Friday and it showed up on Monday.

The only negative was the lack of information on shipping.  The cart showed $0 for shipping/handling and I was charged a little over $5.  It wasn't any more than it cost him to ship, but the lack of shipping costs on the web site should probably be addressed.  Again, Dennis' great customer service came into play and he said it would indeed be added as soon as he could.

Below is a photo of a completed 6" length of fence which is 2" high.  On top of each of the metal posts is a piece of angled polystyrene which will eventually hold a couple strands of barbed wire.  The polystyrene is not included in the kit and is something custom I added on.  I'm still not sure how exactly to do the barbed wire, but I do have a couple ides.  Any thoughts on exactly what to use for the barbed wire would be appreciated...

I won't go into too much detail related to the contents of the kit, but I ended up not using the fabric intended to simulate the chain-link.  The fabric included in the kit has larger diamonds and is better suited to the O-scale train (1/48th) than the 28mm (1/60) I needed it for.  In 1/60th scale, the holes represented by the kit fabric is about 5" which is a bit large...  As part of my previous trials, I had picked up some tulle

(used in wedding veils, dresses, etc).  The fine diamond shaped threading looked to be a good approximation of chain-link, but without a frame to hang it on, I was kind of stuck.  The kit fabric is a bit stiffer than the tulle which would be nice when attaching it to the frame, but I opted for the tulle just due to the scale difference.  The real value of the kit (to me at least) is in the instructions and the jig.  Out of respect for Dennis, I'll leave it at that with regards to details on how it exactly works.  All I will say is that it is fairly simple, yet ingenious.  It keeps things lined up and makes it a lot easier to assemble the frame.


The nearly completed section seen in the photos is one of two pieces that will form a corner on a 12"x12" board.  The right side of the fence will be at the edge of the board and is assumed to continue on into the next board.  The left side is the corner of the fence and a similar piece will be placed at a 90 degree angle.  I'll also be making a couple 24" straight pieces as well as a 24" section with a gate.  The kit includes the makings for working gates which is pretty neat.  This feature is another reason to fix the rest of the gates into place just to prevent something from breaking, but it may still work in a removable fashion.

Below is a photo with a 28mm Rhodesian Light Infantry trooper from Eureka (here is the USA version of the site).  From what I have read, fences such as these were built around the immediate area of the farmstead during the years of the Bush War as well as after.  Apparently they help by prematurely detonating or catching RPG rounds within the mesh.  The fence also hinders rushing attempts from those attacking.

You may need to click on the image to see the full sized version to see the chain-link detail. 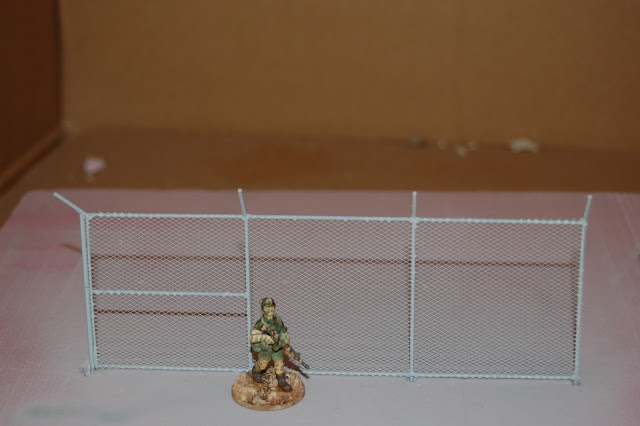 There is another inch of metal post sticking down into the foam holding the fence in place.  I hope to be able to make each fence section removable, yet still maintain the seamless look.  That may not be possible and they may have to just be permanently fixed to the boards...which means more of a storage issue since each board will need its own box.  Different problem for a different day.

The soldered connections of the fence posts and supports is reasonably strong, but I'm not sure how well it will stand up to being removed from the board and handled when being deployed and stored.  If any of the joints break they will be difficult to repair by soldering since they are already painted.  It may have been best to just use styrene rods of various thickness for the frame rather than the metal versions, but styrene may not be rigid enough to give the netting enough support to keep it flat.  Perhaps another trial for another day...

It was kind of fun putting the fence together.  It does, however, take a lot of patience and it wasn't inexpensive especially since I didn't already have a decent soldering gun.

EDIT(9/20/2012): The day for testing out the styrene option came and went.  In short, it works great.  Much easier than soldering.  The Testor's Liquid Cement

I'm using takes a little while to form a strong bond, but other than the additional wait time, using styrene is much better than using metal.  Another great feature of the styrene is that the frame is much more flexible and will resist breaking unlike the rigid metal frame.  The metal would be great for a static train display that won't be handled, but for gaming terrain, a little more flexibility (and ease of repair) would be nice.  The styrene is plenty rigid, however, to hold the fabric in place.  I'll post some photos of the completed fences yet this week I hope.
Posted by Ryan Skow at 10:50 PM