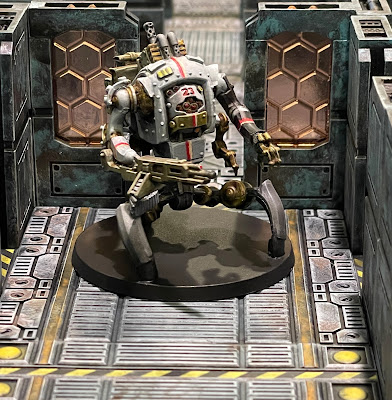 The "Peacekeeper Bot" is available for use by the Heroes in many of the Zombicide Invader core missions.  It felt like a good choice to paint next as it shares many elements with several of the heroes such as the white armor.  Given the list of the upcoming painting subjects, it should prove to be good practice. 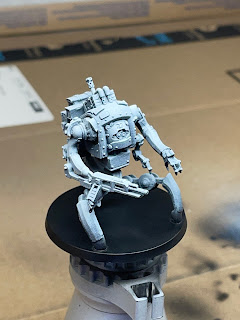 I used the Zenithal Prime technique as I did in my previous posting, the Falchion Turret.  The resulting prime was much more helpful this time as there was a lot more area of dark vs light gradients.  Other than a bit of edge highlighting, I did very little shading of the white armor thanks to the natural underlying gradient combined with the semi-translucent Citidel Apothocary White.  I'm not 100% sold on the contrast colors as there isn't as much control as layering or other more traditional techniques, but I do feel the results are better than my usual tabletop standard (which is the only standard I'm currently capable of attaining 😊).  In my case, that usually amounted to a solid base coat followed by a wash-over-everything. The game artwork was once again my guide for painting this miniature.  I was a little confused as to what paints to use for the metal yellowish-gold pieces, but eventually came up with something that I think is acceptable.

Overall this model was enjoyable to paint despite parts of it seemed to be a bit miscast (namely the right arm socket area) which looks a little cruddy.  In hindsight, I would have tried using Tamiya masking tape and airbrushing the 'racing stripes'.  I think that would have made the stripes look more natural as well as taken less time and concentration.
The various pouches on the Bot's back are another area in which the Zenithal prime really helped out.  After a coat of Vajello's US Olive Drab Air, the natural gradient gave the pouches some natural tonal variation.  I did add a few extra highlights on some of the edges and small areas of pin washes between some of the pouches to help them pop out more, but painting them was very quick. 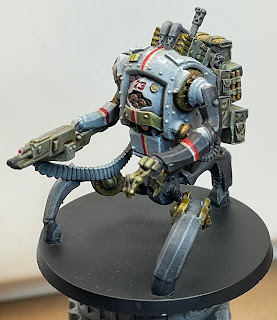 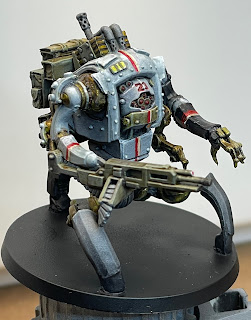 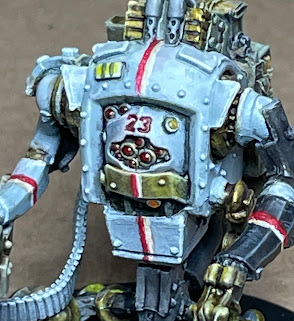 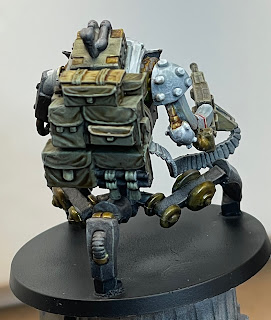 Here are the plethora of paints I used on this model: 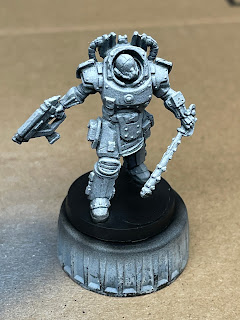