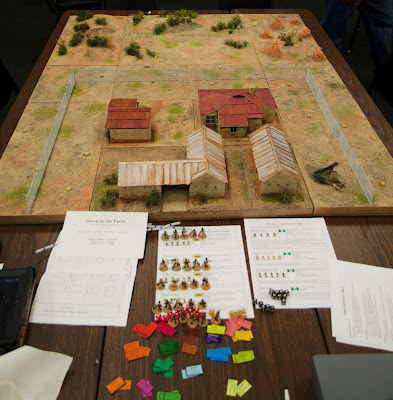 This past weekend at Fields of Honor, I ran three games of the Down on the Farm scenario out of Ambush Alley's Bush Wars expansion.  This AAR covers all three games we played.

Everything set up and ready to go.  The deployment zone for the ZANLA was declared as 2' from the far edge relative to the picture to the right.  The civilian farmers started in the farmhouse and the guard force started in the small building on the bottom-left which is attached to the larger storage building.

As a house rule (based on historical accounts) we counted a -1 penalty for RPGs shooting through chain link fence.   It didn't have that much impact on the game since the ZANLA players moved nearly every round and the 1/2 firepower die due to night fighting resulted in 3 die firepower anyway.  It gave the fence more of a game impact and provided some motivation for the ZANLA to close in. 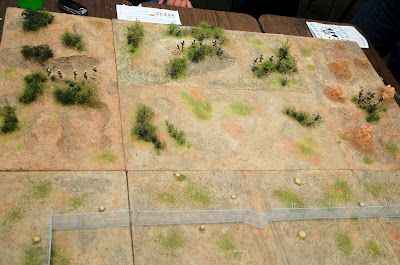 ZANLA deployed and have initiative.  They retained initiative throughout the game. 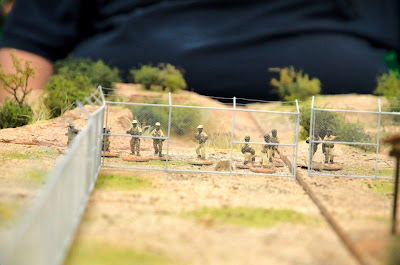 The left flank was first to reach the fence.  Neither of these two squads were spotted, nor could they spot any targets to engage so they rushed forward. 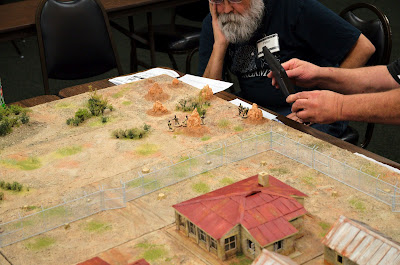 The right flank exchanged some rounds of fire with the farmhouse occupants, but no casualties were inflicted.  Throwing so few dice (3D6) into the farmers' stout defense (5D8) seemed a bit futile so they decided to move in closer.

Note that we ignored the 'In Cover' bonus dice as it would have just further made the Rhodesians even more untouchable. 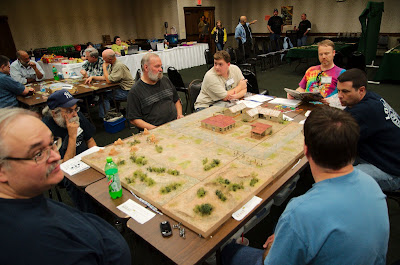 Here are the six players plus one alternate who I said could run the police section if/when it showed up.  Six players is probably a few too many for this scenario since everyone only had one squad to run.  Fortunately nobody was wiped out early in the game partially thanks to the half firepower the night fighting rules imposed. 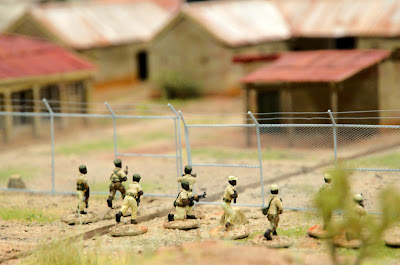 ZANLA units prepare to activate and surge forward.  Note that there are two squads in this group.  The small squad sized outlined in the scenario seems to be a significant issue in general and certainly will turn out to be for both  evening games. 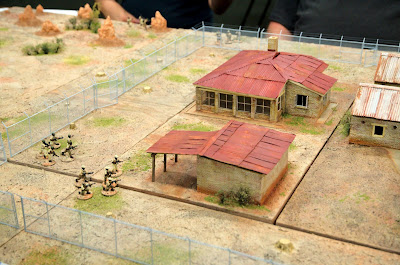 The Rhodesian players placed their booby trap at the intersection of the four boards near the carport.  This happened to be right where the two ZANLA units crossed.  In the photo, the leading unit activated first and the farmers held off springing the trap until the second unit activated and was within the 4" blast radius.  Due to some poor rolling by the Rhodesian player and good rolling by the ZANLA player, not a single casualty was taken by either unit. 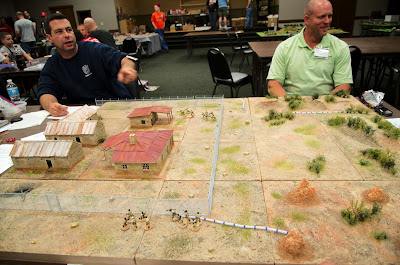 The ZANLA sneak under the cover of darkness around the Rhodesian right flank.  Both sides had significant problems with spotting each other to properly engage. 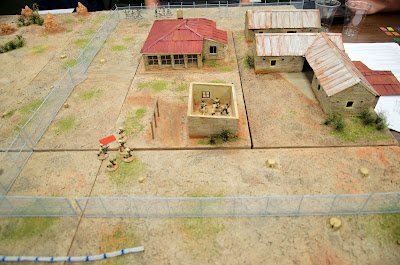 Unscathed by the blast, the trailing ZANLA unit takes cover in the carport building.  The other unit on this flank took fire from the farmers who were finally able to spot them.  Although not pinned, the ZANLA's return fire was ineffective against the well defended farmers.  Neither side rolled particularly well or poorly, but the statistics alone kept the small ZANLA squads from being effective. 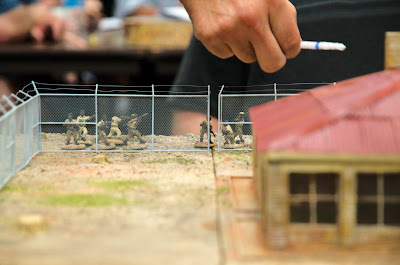 Two ZANLA squads on the Rhodesian right flank prepare to rush towards the house.  I did warn the ZANLA players that their comrades had heard rumor of these farmers pulling out shotguns for close range.  They didn't listen...;) 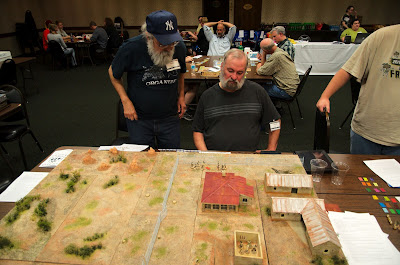 As they closed, each squad took at least one casualty, but eventually got to within reduced optimum range fairly intact. 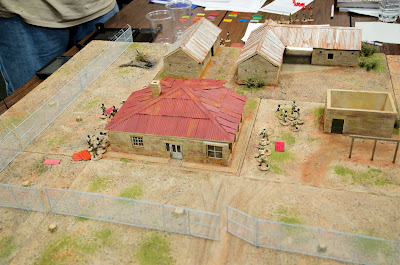 Once they reached the 4" optimum range of the farmers, the casualties began piling up.  One of the ZANLA units moved into the farmhouse for a close assault. 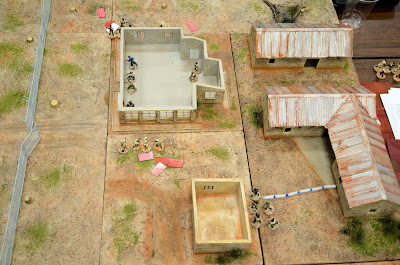 The farmers quickly subdued them with their double-dice shotguns and managed to keep two prisoners.

Up to this point the player running the guard force unit held position partially due to failing several spot checks.  Seeing the ZANLA charging the house, they decided to move forward to take position in the carport. 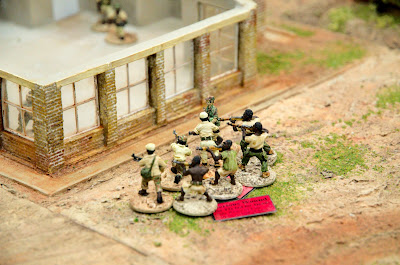 While the farmers held onto their right flank, the guard force made the move into close combat and quickly cleared the left flank of any opposition.

The police force eventually made their troop quality test, but by the time they did, the ZANLA were pretty much finished off so we called the game.

The ZANLA failed to inflict a single casualty on the Rhodesians.  This type of thing can happen in Force on Force, but this one was particularly dismal if playing on the ZANLA side.  Rolling so few dice on the attack due to the night fighting rules really made it tough on the D6 TQ troops who depend on making up for lack of quality with quantity... 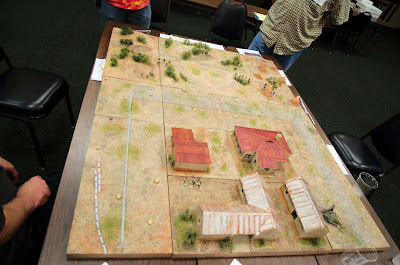 
The second game was played by four players including myself.  Two of the others had played in the first game and we convinced another passer-by to join in as well.  The setup was the same and only planned on changing tactics to see if that helped matters any.  Running into the shotguns obviously didn't work well so the ZANLA players planned to hold back and shoot. 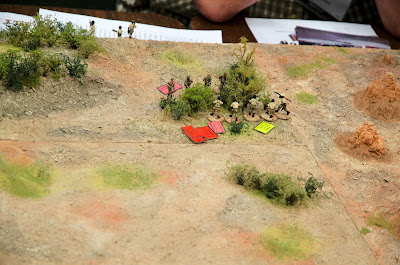 We probably should have kept the police force out of the equation, but they showed up on time and threw a monkey wrench into the ZANLA plan and took out one of the squads without much issue. 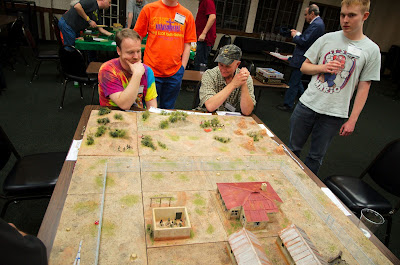 The ZANLA players contemplate their strategy as the guard force takes up residence in the carport.  Attrition, mostly due to the Rhodesians rolling a few 7&8s on the attack die, prevented yet another ZANLA attack from being successful.  We kept playing for awhile, but I didn't take many photos as all positions were fairly static.  Different tactics, same end result.  The ZANLA units definitely seemed too small to be effective. 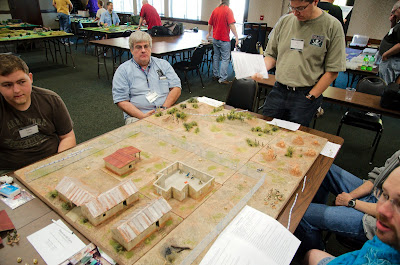 The player who was the alternate was able to get into the game the next day which also turned out to be full.

The setup was exactly the same, but I modified the scenario by adding two more figures to each ZANLA unit, reduced the farmhouse from 2D cover to 1D cover, and removed the support weapon from the police force. 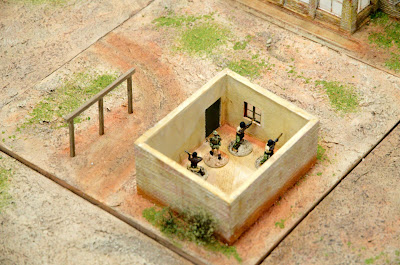 The guard force immediately moved from the storage buildings into the carport. 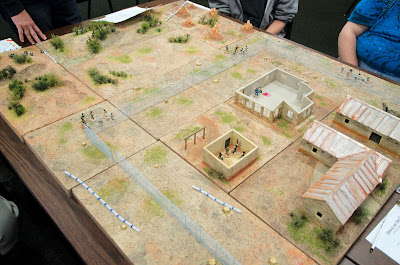 The ZANLA forces moved towards the fence after several spotting failures.  Hardly a shot was fired the first four turns due to spotting failures, but one of the farmers did suffer a serious wound.

Again, the Rhodesian players declared the booby trap to be in the same location and the ZANLA unit on the left flank happened to walk right over it.  This time they weren't so lucky and sustained casualties, failed morale, and proved to be mostly ineffective the rest of the game.  The booby trap definitely turned out to be effective. 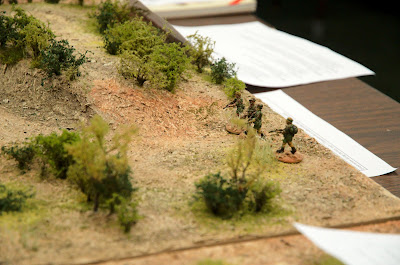 The police section showed up on time and made an entrance at the rear flank of the ZANLA.  They had their own share of failed spot checks due to the darkness and therefore needed a few turns to get up into the action. 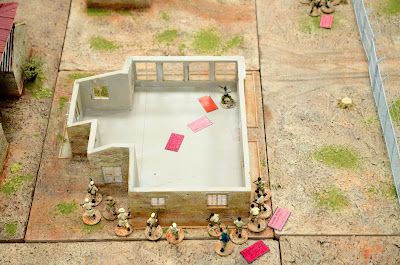 The two large units of ZANLA on the Rhodesian right flank were able to seriously wound or kill two of the remaining three farmers as well as inflict a casualty on the only one which remained.  They quickly moved into the house and happened to take the farmer as a POW. 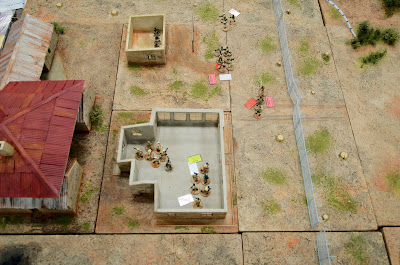 The police force moved into the compound, but found there to be overwhelming firepower coming from the house as well as the other mostly intact squad in the open area nearby.  Although several casualties were inflicted by both sides at this point, most of them turned out to be light wounds. 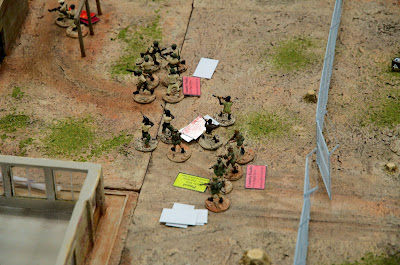 Eventually the police section got pinned and all four members went down.  As the ZANLA prepared to rush forward and kill or take prisoner any that survived, the guard force made their reaction test and rushed forward intercepting the movement and inflicting a casualty on the advancing ZANLA unit. 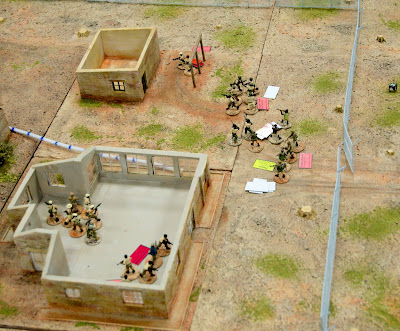 With the guard force in close proximity, the police section was able to test for first aid rather than wallow on the ground waiting for someone to help them.  Unfortunately, the concentrated fire of the ZANLA units occupying the house was able to seriously wound most of the remaining Rhodesian forces leaving only two guard force and two police section left standing. 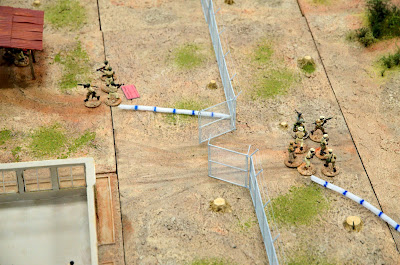 The Rhodesian survivors decided to make a hasty retreat through their very own gates.  The ZANLA troops from within the house followed with hostage in tow. 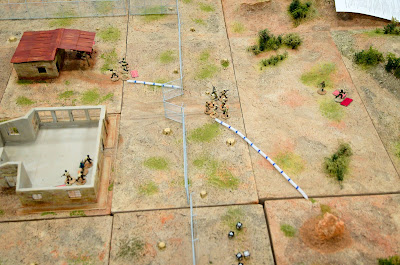 After a couple successful spots and rounds of fire, the Rhodesian survivors were taken down to two. 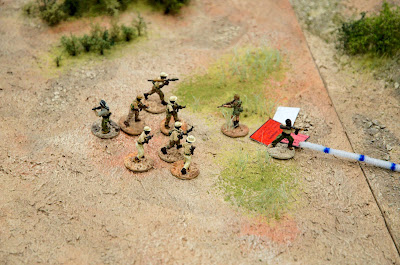 Stuck in place due to serious wounds, the ZANLA caught up to within close range and finished off both survivors.

Through most of the game it felt like the Rhodesians had their work cut out for them, but with a good set of rolls could get them on top at any time.  Those rolls never came and the ZANLA enjoyed a landslide victory.  Although I perhaps tweaked the scenario a bit too much, this game appeared to be much more enjoyable by all involved.  Next time I'll probably leave the police section as-is and add back in the 2D cover for the house.  The only tweaks would then be adding two more to each squad plus another random support weapon or two.

Overall I found this to be an excellent scenario other than the need to tweak the ZANLA unit size.  It was a lot of fun to make the terrain pieces and see them in use.

Has anyone else ran/played this scenario as-written?  If so, please comment below on your experiences with it and if any tactics have been found to give the ZANLA a chance of coming close to winning.