I had a great time at Fields of Honor this past weekend.  Two sessions of Force on Force were played and below is an After Action Report for both of them. 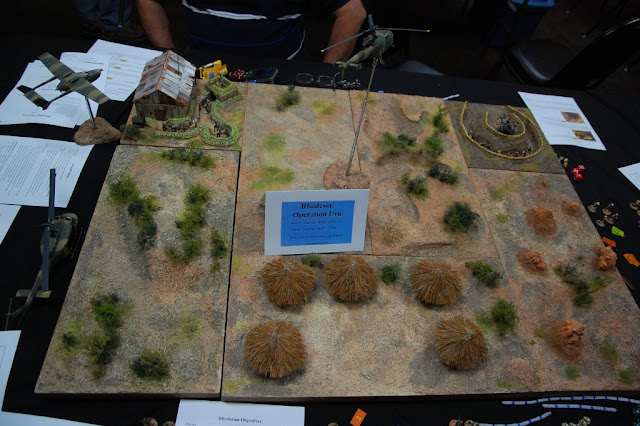 Background
This scenario is set in 1979 near Gaza, Mozambique. The Rhodesian forces have been deployed to neutralize a training camp which serves as a major gateway for ZANLA guerrillas into Rhodesia.


The first session comprised of three players, two of which were already familiar with the rules.

Throughout the entire first game the Rhodesian player was challenging the laws of probability by rolling such high numbers so consistently.  The ZANLA players rolled well too, but could not stop the continued onslaught of 7s, 8s, 9s, and 10s with their d6s.
The points in the end were fairly close as the ZANLA were able to hold off the Rhodesians from their objectives for long enough, but the Rhodesians still came out ahead.  Round after round of being slaughtered and only taking down a single Rhodesian the whole game made it kind of a tough match for the Guerillas.

There really is not much more to report on for this first match.  It was so one-sided on the Rhodesian side that I thought the scenario was completely broken despite the several run-through games I had played previously which seemed much more balanced.

Moving right along to the second session...

In this session there were again three players, but I jumped in as well this time to make it a 2 on 2 game.
This time the game was completely different.  Each round things went back and forth and several exciting events occurred.
A botched roll on the Air Strike Effectiveness Table resulted in the K-Car being destroyed!  Only a couple turns later, another roll of 1 meant the fall of the Lynx as well:
In an earlier turn, before the Lynx went down, the AA gun was destroyed by its mini-Golf bombs.

The Rhodesians had an entire stick go down and unable to do a First Aid check.  The ZANLA unit hidden over the ridge charged forth in an attempt to capture the stick.  Although suffering three initial casualties from another Rhodesian, the single guerilla left was able to make it to the next round and took a single prisoner alive and left three dead.

Another Rhodesian unit had two serious wounds and called for CASEVAC.
On the way in, the Cheetah came under fire from two ZANLA RPGs as well as the DShK.  Returning fire with its dual .303 guns, the resistance was quickly quieted and the chopper landed without even a scratch.

After loading their wounded onto the Cheetah, the remaining two members of Stick 1 successfully thwarted the substantial group of ZANLA approaching along the ridge line. 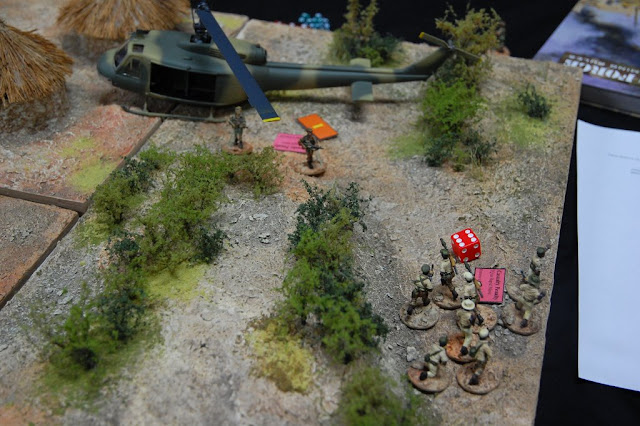 Turn 10 was the initially declared end-of-game and prevented the Rhodesians from obtaining their objective of destroying the radio communications.  Adding up the points left the ZANLA on top.  Although casualties were extremely heavy on the ZANLA side, the loss of the aircraft was too much for the Rhodesians to overcome.

Everyone had moments of glorious success as well as moments of catastrophic failure - a great game!

Here are the various documents describing in detail the troops and scenario that were used: