The Alouette III was an integral part to Rhodesia's Fireforce.  Two types were used, the first being the K-Car armed with a MG151 20mm cannon served as the orbiting headquarters for the Fireforce commander and will be the focus of this post.  The 1/48 scale model below will work well as a starting point.  A few modifications will be needed to make it look more like the Rhodesian version including:
This Fujimi 1/48 scale Alouette III is unfortunately out of production and very difficult to find.  I sent a message to Fujimi inquiring about the possibility of a re-release, but was met with no reply.  Here is their Contact Form and if you are interested, perhaps you can send them a message as well... 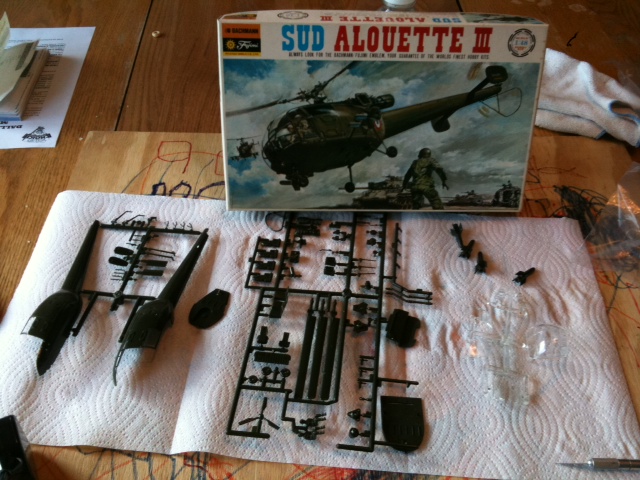 Part 2 (September 14, 2011)
Fairly good progress on the Alouette III - it is starting to look like a helicopter!  All of the sub-assemblies are complete and the glass is almost all masked.  The masking process isn't nearly as tedious as I thought it would be - although delicate work, it moves right along.  The photo is terrible, but you can sort of make out the Fireforce commander's rear/side facing chair next to the bright white console that I added.  The rotor hub and blades are not glued on yet nor is the engine.  The plan is to paint them separately and just mask the contact points between the pieces so the glue will still melt the plastic properly and form a good bond. 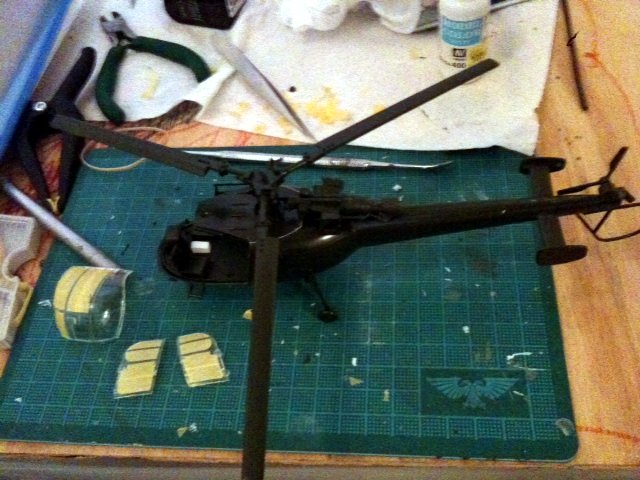 The 20mm cannon still needs to be built, but that might be a post-convention addition as I'd really like to get a Cheetah built as well...