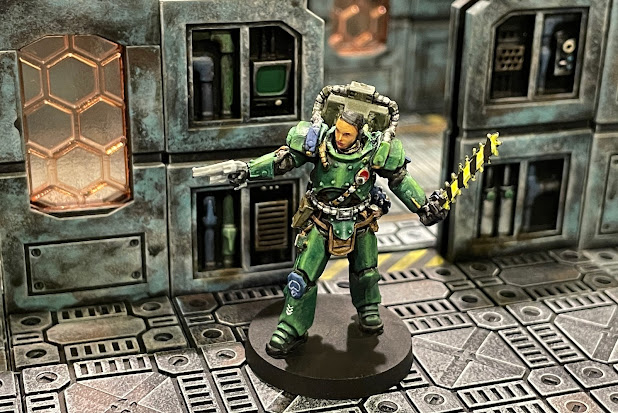 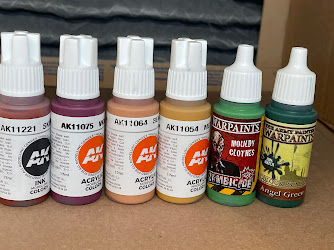 Miranda is the first (in mold sequence number) of the 'Green Squad' in the Zombicide Dark Side game.
The face turned out fairly well using the AK Interactive flesh-tone paints, although it is slightly chalky under very close inspection.  The chalkiness is really a nit to pick as I'm really happy with how the overall model came out.  I couldn't find the flesh-tone set at a local Game Kastle hobby shop, but they did have all of the paints contained in the set as separate bottles.
The green was a bit concerning in the beginning as I started with the Angel Green thinned down a bit too much as it is already a very translucent paint.  It took way too many layers to form the 'first' coat upon which to build layers. 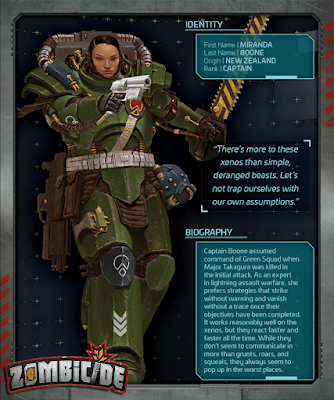 This is the first model in which I used green without using a green wash or dry brushing.  It took a relatively long time, but it turned out fairly well.  Nothing wrong with either washes or dry brushing, but I wanted to challenge myself into using a glazing technique that has intimidated me in the past.
The tiny emblems were a bit tricky, but turned out ok for the most part.  Generally that type of thing I'd skip, but I was feeling adventurous and gave them a shot.
The chain sword did not turn out as well as I'd hoped.  In hindsight, I should have used thinner stripes, but I thought it might be difficult to discern them from a distance and went with the wider option. The stripes are actually decals that I designed and printed as I was having a lot of trouble with correct spacing and consistent width.  I did go over the decals with some touch-up paint so some inconsistencies are still present.  I was able to make and print the decals faster than I could have painted one side of the chain sword so it will pay dividends as most others in this crew have some sort of caution-strip-chain-sword as part of their person. 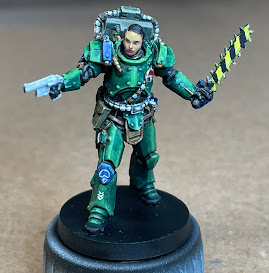 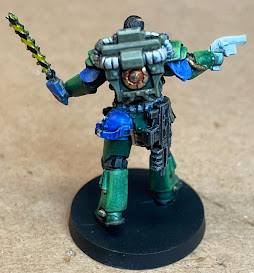 Paints used on this model (lots of bottles, but mostly tiny amounts used for face and a handful of washes and mediums): 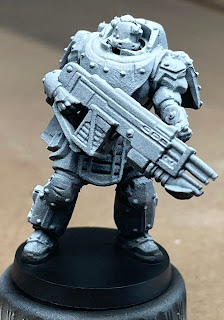