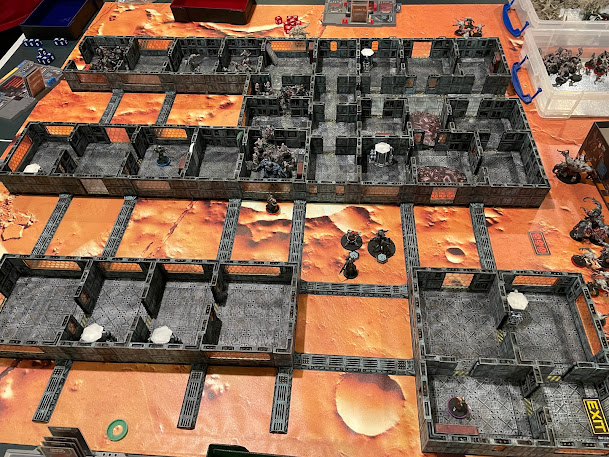 In the continued effort to strike the balance of challenge and excitement, another round of the Xenium Burger scenario was played.  Overall we had a great time, but due to the 'luck of the draw', we didn't see any Abominations until several turns into the game.  Things play out quite differently when 'big blue' shows up during the first draw of the spawn card.  All versions of Zombicide suffer from varying difficulty depending on the order of spawn (and search) cards drawn so it probably isn't reasonable to try to solve that problem and still use randomized decks. 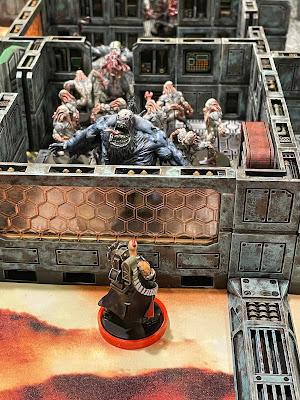 The title picture of this post shows what should have been nearly the last turn of the game.  Umkos, however, found a way to up the challenge and turned back to face the Juggernaut Abomination.  My favorite photo of the game is Kyle 'tapping on the glass' to taunt the poor Juggernaut and his Worker entourage. 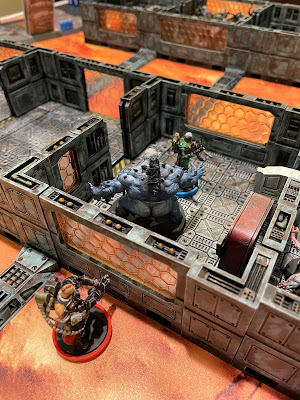 Umkos was a bit surprised at the speed of the Juggernaut and an extra activation put it in the same zone as the unsuspecting alien.  He quickly realized he did not actually have any way to stop the beast. 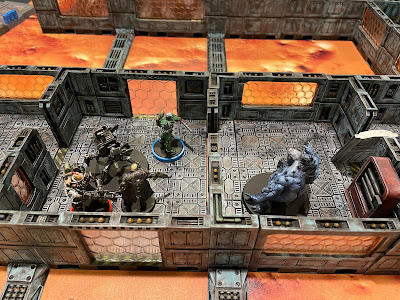 Fortunately, Kyle still had a canister attached to his Pyre Minigun and with Jean looking on to make sure everyone was accounted for, was able to dispatch it without further issue.
This detour resulted in another half hour tacked on to the end of the game due to being in 'Red' and both spawn points near the exit still being active.  It was a lot of fun and definitely provided some additional touch-and-go moments as the group finally made its way to the exit.
I had added back in the lower-numbered spawn cards which could be part of the reason for the slow start-up with spawning.  I've removed 5 of the lower-numbered worker spawns as well as one of each of the lowest-number cards for Tanks and Hunters.  Hopefully, that tweak will up the chances of an ideally balanced game.
After playing a solo game and finding zero energy cells in the entire game, I also enriched the item deck with 5 additional energy cells pulled from the Dark Side deck.  The SMG card was also removed as nobody really wants to find more 'starting equipment'...
Posted by Ryan Skow at 6:53 PM