After noticing that the front wall was about 1/16" too tall on one side and the front picture window was a bit messed up, I decided to re-master the front wall.  I had set aside the original master mold so the work wasn't too bad.

After an accelerated drying behind the dehumidifier, the windows of this piece and the rest were carved out a bit to allow the frames to fit.  For the most part that just consisted of carving off the brick texture in the area around the window near the inside of the wall. 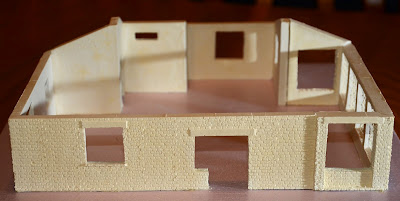 It was finally time to assemble the walls...I was a bit nervous as to how things would line up with all of the corners and if I was going to have a 1/2" gap when the first and last  pieces came to match up.  By a minor miracle, the walls lined up perfectly. 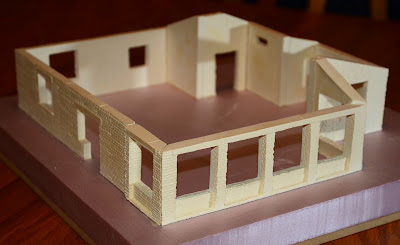 The walls are based on 1" pink foam mounted on 1/4" MDF.  To glue the walls down I used Liquid Nails which does a pretty good job of holding pretty much anything together - even to the non-porous pink foam.  I did rough up the foam a little bit where the walls would actually be glued to give the glue a better hold.  The corners themselves were glued together with Aleene's Tacky Glue

which bonds the porous dental stone quite securely. 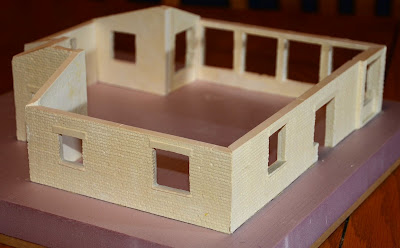 At this point, you can still see very small gaps at the corners of the walls.  Before starting this project, I made some test pieces and after applying a little Crayola Air-Dry Clay, the corners look seamless.  Once the glue in the walls is fully dry, I'll apply it to the model and that should make the seams disappear.

Gluing the pieces down to the base only took about 10 minutes.  The 45 degree angle block worked like a charm leaving me with very little trimming to do to get a good fit.  To keep things in proper alignment, I used some carpenter's squares and Lego Ls in the corners to ensure an accurate 90 degree angle. 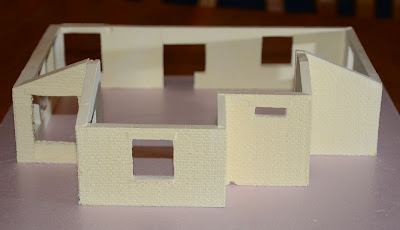 I plan on adding a Rhodesian Boiler (aka Donkey) near the wall with the small window on the right.  The Rhodesian Boiler is a brick structure that wood, corn cobs, or other combustibles were burned in to heat the water in a 44 gallon drum.  Using a series of pipes, hot water under a bit of pressure was provided for bathing.  From what I've heard these were very common and should add some nice flavor and give a hint of location to the finished piece. 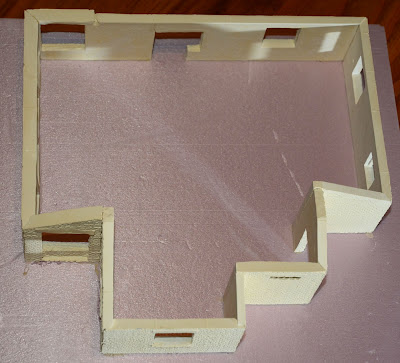 Next on the to-do list is to fill the seams as I previously mentioned.  After that it will be time to do some paint tests on some scrap pieces I cast using excess plaster from the wall sections.  Normally I can estimate pretty well how much plaster to mix up, but I didn't want to leave it short given the risk of messing up the temporary Plasticine mold.  Yes, another layer of plaster could be poured over the first as it set up, but that can leave some strange patterns...  In any case, I knew I'd need some scrap pieces to use to practice painting so they wouldn't be a complete waste. 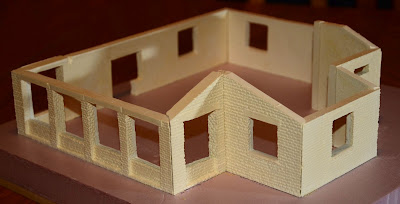 The final angled view is similar to that of the original reference photo.  It is a little to high of an angle perhaps, but close enough for now.

Not an exact match, but I can see the resemblance.  Once the roof, frames, and little awning is on I think it would be recognizable as representing part of this particular house.

The masters and molds for the door and miscellaneous window frames are on the left.  On the right are the mold and pieces for the shuttered windows separate from the frame to allow me to model the windows open as seen in the reference photo.  Most of the cast pieces seen in the photo still need to have the holes for where the panes of 'glass' will be.  The door will actually have the bottom two panels left as solid while the top two will be trimmed and filled with clear resin.

I'm getting more comfortable with using the Amazing Casting Resin

and really like how easy it is to replicate pieces.  Even though I only need a couple doors and one of each of the small windows, I figured I could use them on future models.  In addition, if anyone actually wants to buy some sort of 'kit' of this house at some point the window and door trimmings could be included. Two pieces of each wall were cast so if enough interest is there, it would be possible for me to make a silicon mold and cast these as a model kit.

Well, that basically wraps up this update.  Questions and comments are welcome below and I look forward to getting out the next update!