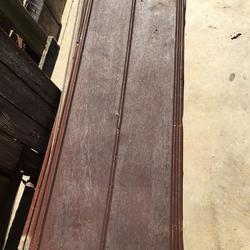 Since the beginning of this project, I have been trying to crack the riddle of how to get the tin for the roof the barn to look similar to that of the actual Green Farm barn.

I've done corrugated tin in the past for other projects, but if you look closely at the roof of the barn, you'll see that it is a bit different.  The photo on the right is similar to what was used on the barn.

Using actual tin from pop cans has its pluses and minuses.  On the plus side, it is very sturdy and is easy to make look worn in a realistic looking fashion.  On the minus side, it can be a bit difficult to get into the desired shape and can be very difficult to replicate fine details such as the double-ridge on the edges of the real thing. 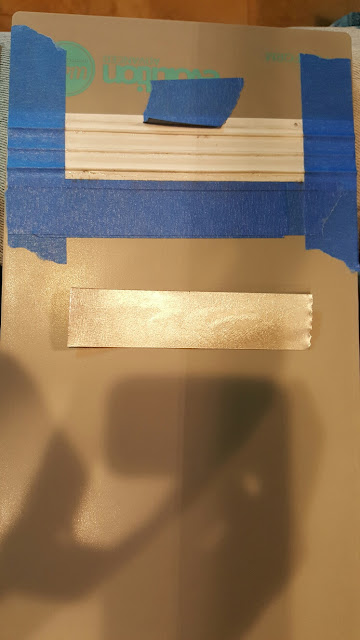 After several rounds of trial and error at trying to make shape the metal, I was about to conclude that I'd need some other specialized tools to make the form itself.  Fortunately after some prayer the night before, I woke up last Saturday and easily threw together what turned out to be a very simple form that turned out to work wonderfully.

You can see the form to the right taped down to the base plate of the embossing machine.  It is basically a thin sheet of polystyrene with a two pieces of polystyrene rod glued near the top and bottom edges and a piece of half-round polystyrene glued down the middle.  It took some careful positioning and gluing, but the whole thing was put together in about 5 minutes.

Below the form is a 'blank' piece of sheet metal from a pop can.  It measures 4" long by about 1" wide.  More on the various steps in the process below.


Below the tin is the shadow of my hands and phone taking the picture...I was too lazy to crop...sorry. 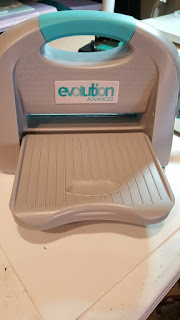 Here is a photo of the "evolution" embossing machine.  It basically has some steel rollers that applies pressure to a sandwich that you crank through it.  It isn't exactly inexpensive, but it can be used for all sorts of other crafts that other family members enjoy working on.

The embossing machine basically puts a lot of pressure on the tin and forces it to form over and around the polystyrene rods.

There are several steps in preparing the tin, but before that, let me introduce you to the next indispensable piece of hardware... 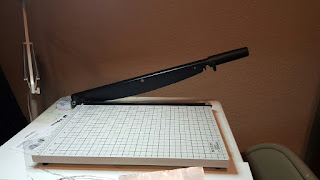 The paper cutter!  It turns out that it can cut tin cans quite well.  I'm pretty sure the whole process would have taken 10x longer and really not looked very good if the trimming were done by hand using scissors.

I'm not sure if there are any long term negative effects on the cutter, but it seemed to cut the tin without any sweat and seems no worse for the wear after making hundreds of tin cuts.

Now to go through the various stages of tin preparation.

Starting with a standard 12oz soda can, I used a kitchen shears to cut off the top and bottom.  I then cut a line down the seam to end up with a flat rectangular sheet.  I then used an random orbit disk sander to sand off the branding markings and all of the paint on the can.  This also roughs up the surface so it looks a bit more weathered.  In addition, I sanded the inside to take off the slick coating to allow the tin to be glued together later. 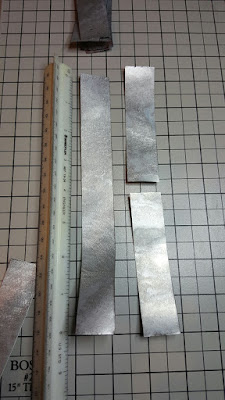 To initially measure the width of the tin strips, I used my trusty triangular engineering ruler which happens to be about an inch wide.  I was able to just draw a quick line on the tin, rotate the ruler one turn, keeping one edge in place, and then draw another line which is perfectly parallel to the first.

This is a photo showing a couple early stages of tin.  From the sanded rectangle, three 8"x1" strips of usable tin can be obtained.  There is a bit of waste, but most of the cans I used didn't even offer the 5 cent refund so the cost of the raw materials is basically nothing.  The 8" strip on the left is then cut down to two 4" strips using the paper cutter.

This cutter has very handy measuring marks so I was able to skip all the time consuming manual measuring and marking steps before cutting. 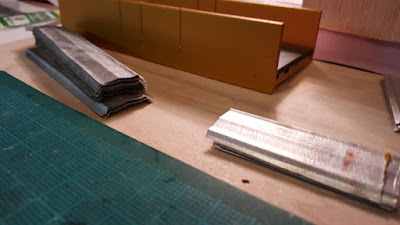 I then use a bit of painter's tape and tape one of the 4"x1" strips down to the form to secure it in place.  The rubber layer and top plate are then laid on top to finish off the sandwich.  I taped the form on the first quarter of the sandwich so I didn't have to roll the whole sandwich through each time.  These stacks of tin are all freshly pressed and ready for the next trimming step. 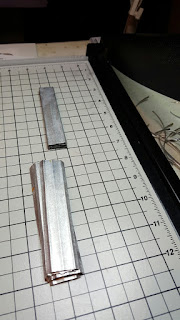 There are two stages to trimming.  First the excess is trimmed from the two long edges.  Thanks to the paper cutter, this job was not only made much easier, but it is also much more consistent than using a hand-held cutter.

The second stage to trimming is cutting the 4" section (which is actually just over 4") down to exactly 4".  Next the 4" section is cut in half to provide two 2" sections which is the final dimensions of a single piece of tin that will be affixed to the roof. 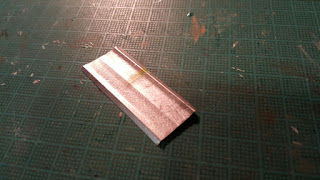 Here is a finished specimen all trimmed up and ready to go.

In short, I calculated the number of pieces to finish the roof, awning included, to be 180 which seemed to be a lot, but actually didn't take long to complete once the process was rolling (bad pun intended). 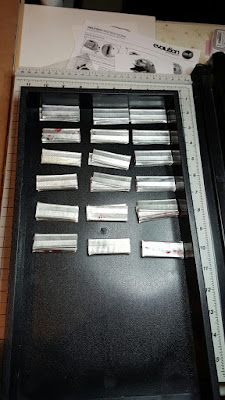 Behold!  Over the course of three evenings and with the help of one of my kids, 18 stacks of 10 pieces each are all lined up and ready to be attached to the roof.

Overall, I'm very pleased with how smoothly the process went.  I was concerned that the project was going to get shelved due to coming up with no solution to the roof.

Although the miniature version of an individual piece doesn't exactly match what is pictured above, I believe that when assembled together they will provide a convincing reproduction of the real barn that was down in Georgia.

The next step will likely be to glue the ground floor down to a base and then finish some of the woodwork of the various animal pens.  I'd like to jump right into gluing the tin on the roof, but need to figure out exactly how the awning is going to be attached. It may be fixed to the base or it could come off with the middle layer of the barn.  On one hand it would be more sturdy if left attached to the base, but it may look better and be easier to move miniatures in the external pens if the awning came off. 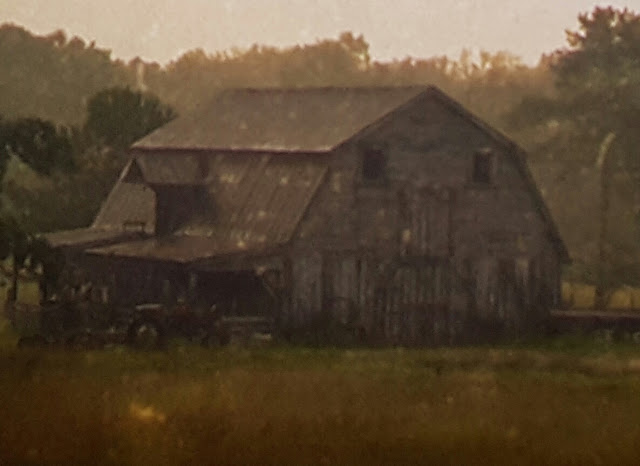